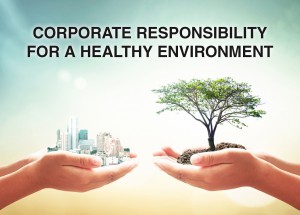 The environment is the most important element for the survival of all things living, and there is no denying that it’s constantly changing. But as it changes with the passage of time, the need to be aware of the issues that surround it increase drastically.

For a long time in the history of business, organisations have only taken from the pool of resources without contemplating about the future. Today, however, the trend has certainly changed as more companies and leaders are not only putting something back into the pool, but are also inspiring the change. Some audacious CSR projects have certainly made a positive impact across the country, but the dream of instilling a sense of responsibility in the modus operandi of business remains blurred.

To be more responsible for the well being of the society and the environment, companies have to go beyond the basic set of activities and integrate the efforts at every stage of the operations. The environment is arguably on the verge of a critical threat and continues to worsen off exponentially.

Here are the major threats that need to be considered while planning activities:

1. Global warming: The seemingly inescapable threat to survival, ie. global warming is only getting and causing, even more, environmental issues such as climate change and ozone depletion to name a few. Emission of CFC (Chlorofluorocarbons), burning of fossil fuels and carelessly releasing harmful gases into the atmosphere that culminate into increased global temperature.

2. Pollution: Irresponsible waste disposal, ocean acidification, and acid rain are some of the issues caused due to pollution that easily top the chart. These factors only lead to further deterioration of biodiversity. If only we could check such problems at the source, it would not only bring stability to the ecosystem, but save resources that are spent to reverse the negative effects of pollution.

4. Loss of biodiversity: The loss of biodiversity due to overpopulation and urban sprawl at such an alarming rate is a major concern. While expanding our human footprint, we need to ensure that we don’t harm the natural resources in any way.

Our ultimate goal should be to add to the pool of natural resources, while ensuring sustainable growth.