“It is health t 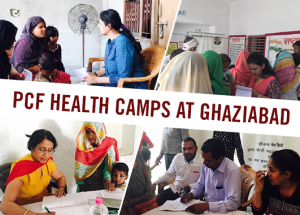 hat is real wealth and not pieces of gold and silver.”

Standing true to it’s vision of helping the underprivileged section of the society, the Ponty Chadha Foundation organises health camps every year in order to help the needy who are deprived of the basic facilities related to health care.

Poor access to healthcare is one of the most pressing challenges faced by the vulnerable and marginal sections of society. Due to lack of proper medical care, 28% to 30% people die every year that includes infants, pregnant women and the elderly. In order to combat this challenge and help reduce the number of deaths, Ponty Chadha Foundation has embarked on a path to bring about a positive change in the lives of those who are poverty-stricken.

Two such health camps were organised this month on 11th and 19th of April  both which are a part of Ghaziabad. The major health problem faced by both these villages were diseases related to skin and flowing ear. Out of the total population of the village Raghunathpur which is 1640, the total number of people who attended the camp were 142. As for the village Chhidoli, 134 people attended the camp out of the total population of 3000.

There were two doctors present at the site to address the problems faced by the villagers out of which one of them was Dr. Ram Saran Garg who is from Indo-German Hospital. He has been a part of PCF since a long time and has helped us organise successful camps in different villages of Noida and Ghaziabad. The patients were checked through thoroughly by specialized doctors and were given elementary medicines free of cost. All the expenses incurred for conducting the health camps are borne by the Foundation.

The PCF head was of the view that health camps are basically organised with the purpose of serving the poor and the underprivileged section of the society. The lack of medical facilities for the needy was a crucial matter and hence the idea of conducting health camps in these villages would benefit people immensely.