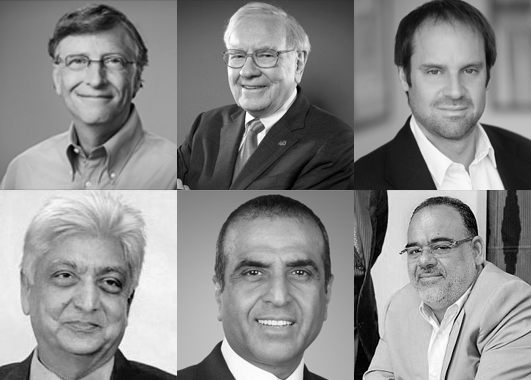 “It is every man’s obligation to put back into the world at least the equivalent of what he takes out of it.” – Dr. Albert Einstein

Very few people in this world believe in philanthropy. Those who do, know of its importance.
To encourage you to do your bit, here are a few examples of some of the most philanthropic businessmen from around the world.

Bill Gates
When it comes to charity, the Microsoft co-founder is in a class of his own. Be it in terms of scale or amount, nobody can quite match up. He created the Bill and Melinda Gates Foundation and has given away 28 billion dollars ever since it came into existence. He spends a great amount of money in analysing problems and looking for potential solutions. Having achieved notable success in eradicating childhood malaria, he now has projects running in over 100 countries.

Warren Buffett
CEO and Chairman of Berkshire Hathaway, Warren Buffett is among the wealthiest people alive in the world. Number two on our list, he has actually vowed to invest 85 percent of his wealth in social causes.

Jeffrey Skoll
The first employee of eBay, and also its first president, Jeff Skoll has awarded 3-year grants to at least 59 entrepreneurial groups to date. Involved in philanthropy for ten years through the Skoll Foundation, he once gave away a grant to train an army rats to sniff landmines in Africa. He has also produced The Soloist, a Hollywood film that highlights the issue of homelessness and schizophrenia.

Azim Premji
Azim Premji is the chairman of Wipro, an Indian IT and consulting company. His Azim Premji Foundation works to reform the schooling and examination system of India. The organisation has introduced a computer-aided learning programme to offer computer training in at least 18 languages.

Sunil Mittal
Sunil Mittal is the chairman of the International Chamber of Commerce. The philanthropic arm of his enterprise, the Bharti Foundation addresses the educational needs of the Indian population. So far, it has established over 254 schools in villages across India and offers free quality education with free books, uniform and mid day meals to poor children.