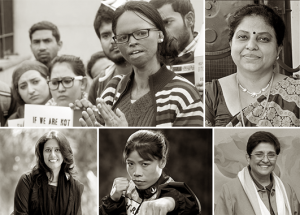 In the last century or so, Indian women have come a long way in terms of professional prowess and self-reliance. They have broken age-old stereotypes and brought about a world of change generation after generation.

Although there are numerous women who have actively spearheaded such efforts, these five exemplary ladies personify the unwavering spirit of the modern Indian woman.

MC Mary Kom
Popularly nicknamed “Magnificent Mary”, MC Mary Kom is known for winning five consecutive World Boxing Championships between 2002 and 2010. She has also won a bronze medal at the London Olympics in 2012. One of the very few Indian athletes who have brought boxing into the mainstream, Mary has helped give both the sport and its practitioners the limelight they deserve and require.

Chhavi Rajawat
Chhavi Rajawat, a lady with an MBA degree, took the road less travelled and abandoned her corporate dreams to become the sarpanch of village Soda in Rajasthan. She has worked aggressively on issues like solar power, sanitation and women empowerment. A firm believer in the power of youth, she does her best to introduce change at the grass root level.

Tessy Thomas
The first woman scientist to head a missile project in India, Tessy Thomas is the project director of Agni-IV at the Defence Research and Development Organisation (DRDO). Also known as the ‘Missile Woman of India’, she was conferred the Lal Bahadur Shastri Award in 2012 for her outstanding contribution in making India self-reliant in the field of missile technology.

Laxmi Agarwal
An acid attack survivor, Laxmi Agarwal is a campaigner for ‘Stop Acid Attacks’ and the director of Chhanv Foundation, an NGO dedicated to help other survivors in India. In 2014, she received an International Women of Courage Award and was named the NDTV Indian of the Year. Working extensively to curb the sale of acid and rehabilitate survivors through her foundation, she has now become the voice of acid attack survivors across the world.

Kiran Bedi
Retired IPS officer, social activist, former tennis player, and active politician, Kiran Bedi became the first woman to join the Indian Police Service in 1972. Remembered for considerably bringing down crime during her tenure in Delhi, she has been actively involved in the upliftment of society through various NGOs and public engagement activities.