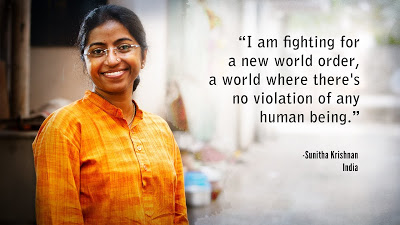 Bravery and humanity is not something that’s inherited. It is inculcated individually within everyone. On this World Humanitarian Day, we acknowledge ten humanitarian heroes in India who have inspired us to lead our lives with one motto- ‘Live and let live!’

Young Sunitha wanted to make the world a better place by teaching the slum-dweller children. But her simple wish of bringing a change brought a resistance for her and she, at a tender age of 15 became a gang rape victim. But that didn’t stop Sunitha at all. Instead, she grew up to become a social reformer who is constantly working towards the rescue, rehabilitation and reintegration of sex-trafficked victims into society. She established an NGO named Prajwala in Hyderabad to fuel her dreams to build a better future for such victims. Even a lot of hardships like death threats, several assaults and an acid attack didn’t deter her in her life’s humanitarian motive.

Who knew a simple young Nepalese teacher could bring a wave of change in the lives of affected during severe Nepal earthquakes. But Jigme Sherpa rose above all odds and provided major help to those who were stuck within the perimeter of the worst affected tremor hit areas of the country. He stimulated the social media for urgent aids and took an arduous journey through the mountain roads to deliver aids to his students’ villages situated in the worst hit Sindhupalchok District. He was the only source of assistance for a number of survivors. With his go-getter attitude, he reinstated the hope in the thousands of affected Nepalese population and became a crusader of change.

KS Sarojamma dauntlessly took on to the silk trading mafia in Magadi, for the rights of the children who were exploited inhumanly to work in such factories. She organised raids, filed PIL’s and continued her humanitarian efforts to bring a change in the lives of the affected. Due to her efforts, 800 of such silk factories were shut down. She didn’t give up even after her husband got murdered for her helpful attempts. Sarojamma rescued over 3,000 children and now runs a Chiguru Balvikas Sanstha for the rescued girls where everyone blissfully calls her as ‘Amma’.

An ordinary Punjab Roadways driver became extraordinary with his bravery and intelligence during the recent Gurdaspur Attacks in Punjab. Nanak Chand was driving when the terrorists started open firing on his bus. But instead of panicking, this fearless man scared the terrorists away by driving straight towards them and flung them aside. He directed his bus towards a government hospital to get his injured travellers treated and also informed the police about the incident. With his bravery, he foiled terrorist’s plans and saved the life of the passengers too.

Jaswant Singh Rawat was serving in the 4th battalion of the Garhwal rifles. In the Sino-Indian war of 1962, he along with two other soldiers fooled and frustrated the Chinese army for three days by maintaining a constant huge volume of fire. His singlehanded control gave opponents an idea that Indian side has a well-equipped army. His tireless efforts inflicted heavy casualties on enemy and forced them to retreat. Severely injured Jaswant Singh Rawat attained martyrdom in Tawang District. He was awarded Maha Vir Chakra posthumously for his grit and gumption.

The captain of the 17 Jat Regiment, Indian Army during the Kargil War-1999, Anuj Nayyar, led his group to capture a key mountain peak, PIMPLE II which was captured by the Pakistani infiltrators. Capt Anuj Nayyar commanded his leading platoon into the attack under heavy enemy artillery and mortar fire. Unmindful of his personal safety, Capt Anuj Nayyar displayed indomitable resolve, grit and determination beyond the call of duty and made the supreme sacrifice. He was posthumously awarded the Maha Vir Chakra for his valour and sacrifice.

As the first woman IPS officer, Kiran Bedi was the face to the millions of liberated women in India. With her honesty, sincerity and dedication, she became the highest ranking woman officer in the country. In 1994, she received prestigious Ramon Magsaysay Award for Government Service. Post retirement, she founded an NGO, Navjyoti India Foundation which provides residential treatment to drug and alcohol addicts in and around Delhi. She also set up the Indian Vision Foundation (IVF) in 1994 with the aim of empowering women, and reforming the police departments and prison.

In 2012, a 25-year-old Muslim girl, Sabiya, rose to be one of the most committed workers of the Polio Social Mobilization Network (SMNet) in Uttar Pradesh. She tirelessly worked to eradicate polio from almost every corner of India. She arranged house-to-house meetings where she interpersonally interacted with parents and explained them about the paralyzing effects of polio.

“Do not come up, I will handle them” the immortal words remain etched in our hearts as the last words of Major Sandeep Unnikrishnan, who gave his life fighting during the tragic Mumbai terrorist attacks in 2008. He was serving in the National Security Guards, the elite special action group of Indian Army. He along with his men fought the terrorist gallantly and rescued the guest and the Taj Mahal Palace Hotel from the clutches of miscreants. He was awarded with Ashok Chakra posthumously, the highest peace time gallantry award of India for his extraordinary courage in the face of adversity.

Bina from West Bengal and Vijaylaxmi from Rajasthan are the two intrepid women of India who raised a strong voice against child marriage practices that are still boomingly practiced in India. First they fought their own parents, then their neighbours and ultimately faced the society. Finally, their voices saw the silver lining.

These stories are not written in golden letters and neither does the media hype them. However, these humanitarian heroes continue to en-kindle several lives for the betterment of the mankind. The Ponty Chadha Foundation salutes them!